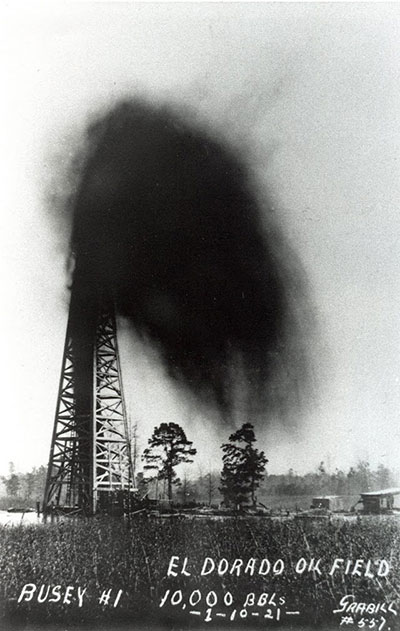 Officially opened to the public in 1986, the Arkansas Museum of Natural Resources is situated in the midst of the historic Smackover oil field and one mile south of the oil rich town of Smackover. Although the museum represents all of Arkansas’s natural resources, it is dedicated to the pioneers of south Arkansas’s oil and brine industries.

The oil industry in Arkansas, which includes exploration and the production, refinement, and distribution of petroleum-based products, exploded onto the state’s economic scene in the early 1920s, and once-local production expanded into an international business. From 1920 to 2003, more than 1.8 billion barrels of oil have been produced in Arkansas.

The earliest natural gas find is reported to have been in Scott County in 1887 during an effort to develop a commercial water well. The second recorded gas well was drilled two years later (also in Scott County) by an oil driller, Harry Kelly, to a depth of 1,600 feet. This was recognized as the first recorded effort to find oil in Arkansas, though “only gas was present.” No other efforts to find oil or gas were reported until 1901–1902, when the Mansfield Pool was developed by Choctaw Oil and Gas Company.